In just days, approximately 4,500 students making up the Brigade of Midshipmen will start the 2017 academic year. And after a summer away from Bancroft Hall, many will need a haircut.

A constant flow of midshipmen, officers and enlisted will enter the doors of the first wing in Bancroft Hall, where the buzzing of clippers will mesh with conversation as a dozen barbers and beauticians ensure their clients leave the barbershop looking better than when they came in.

For two individuals, this has been their environment for three decades. 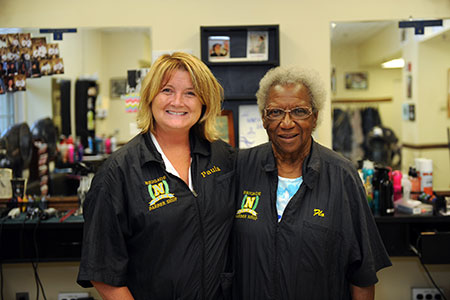 Paula Clarke and Florence Jackson have worked side-by-side polishing midshipmen’s appearance at the U.S. Naval Academy Barbershop. As the academy prepares for the influx of midshipmen returning from vacation and summer training, Aug. 16 marks the anniversary of the day Clarke and Jackson began their USNA careers 30 years ago.

“Personally I feel like USNA is a part of my family,” said Florence – known to all her clients as Flo. “My father, brother and sisters all have worked here. USNA has been good to me, and I love it here.”

Both feel that the job they have allows midshipmen to walk away with confidence, feeling and looking a bit brighter than when they entered.

“It’s a privilege to be able to affect the midshipmen’s appearance, to be able to give them a little boost,” said Paula. “It’s an honor that during walk-ins, there are people that will spend their time waiting for me to be available. It makes me feel good to know they want me to cut their hair and trust me with their appearance.”

Midshipmen and officers return to see Paula and Flo, spanning from their time as midshipmen to years down the road as returning officers and instructors. 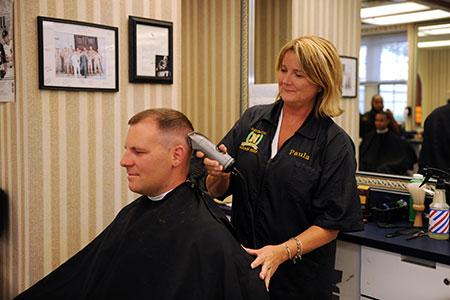 “I love the community here, I love watching midshipmen grow and even return as officers later,” said Flo. “I’ve had people return years after graduating to come see me, and that says something about this place and the people here.”

The walls of the barbershop hold photos of Paula and Flo working with midshipmen. Smiles are shared, emblematic of the priority they place on getting to know the people that sit in their chairs.

“The midshipmen all feel like my children,” said Flo. “They know that when they sit down with me, what we talk about is between us. I care about them on a personal level and want them to be comfortable when they sit down – and happy when they leave.”

A thirty year career at USNA has shown the two how much USNA values tradition, but also how it can change and grow to perform its mission to train future leaders.

“I came here as a beautician because the number of females attending USNA was growing,” said Paula. “Now it’s a regular thing, and it doesn’t cross my mind. This place has always kept its people in mind. Which is why I stay here, and why I want to keep working here.”

The two plan to remain at USNA to improve appearances, offer guidance and share laughs among the midshipmen and staff. For more information about USNA’s barbershop, visit http://www.usnabsd.com/naval-academy-midshipmen-services/barber-shop/