Stories from USNA Public Affairs will now be found exclusively on the News Center at the USNA website.

As part of the exercise, five midshipmen deployed a ¼ scale model using gridshell technology they had researched and designed for their engineering major capstone senior design course.


A gridshell is a structure which derives its strength from its double curvature - meaning its surface curves in two different directions, like a dome or tent. Unlike those structures, a gridshell is constructed of a grid or lattice.

"Our capstone project essentially took gridshell technology and adapted it for use in a HA/DR role," said Midshipman 1st Class Sam Ciocco, lead for the team who called themselves "The Gridshellters."

When gridshell technology is used, which is relatively rare, it's usually in the area of architectural design, said Ciocco.

"Gridshells are not very well utilized or explored, so we did some exploring of our own to figure out how to use its advantages in the unique HA/DR role," he said. "We made great use of the construction method that allows a large structure to be built from the ground, without needing cranes or scaffolding. We used the modular pieces to make transportation and on-site construction easier and more efficient."

The group was led by USNA Mechanical Enginnering Dept. Assistant Professor Samar Malek. She formed the group to explore the capabilities and benefits of gridshell technology in the fast-paced environment.

Malek worked for the last year with personnel at the Naval War College and United Nations on the uses of gridshell technology. Dave Polatty, director of the war college's Civilian-Military Humanitarian Response Program, and Michael Marx, senior civil-military coordination advisor for the UN's Office for the Coordination of Humanitarian Affairs visited with the group to present expectations about civilian and military cooperation.

"This helped the team shape the technology to be deployable in a real-world context," said Malek.

Polatty invited the USNA Gridshellters to test the results of their technology at the Harold Parker State Park event. This gave the midshipmen and Malek the opportunity to test if their idea made sense and how well it worked in an HA/DR situation.

The simulation brought together more than 150 volunteers with students from NWC, Harvard, Massachusetts Institute of Technology, Tufts University and humanitarian nongovernmental organizations to create a constantly changing environment. Many of the exercise participants had real-world HA/DR experience, and were able to give feedback to the midshipmen.

“We were able to share the technology with others that had been in real-world scenarios, and they gave us great insight that we wouldn’t have had otherwise,” said Malek.

The midshipmen's project was one of the highlights of the event, said Polatty.

"Their project was incredibly well received and added quite a bit to the existing discussions that typically take place regarding shelters in humanitarian emergencies," he said. "I was thrilled to see them get so much positive feedback from humanitarians on areas of the world that their design could be used in."


The U.S. Military often takes a relief and assistance role in HA/DR zones. The faculty and midshipmen saw the worth of the exercise in giving an experience the young officers have a very real chance of encountering.

"There are so many moving parts and so many different people and organizations trying to help that coordination becomes a huge problem," said Ciocco. Coordination becomes such a vital part in making sure that people actually get the aid they need. Every person and organization brings its own capabilities, its own resources, and its own agenda to a crisis zone. This includes the U.S. military, who can be constrained by policy decisions, the United Nations coordination efforts in the mandated country, and the host country itself.”

The experience from both the simulation and development of the project was challenging, but worth the team's efforts.

"I was very happy with the outcome of our capstone project," said Midshipman 1st Class Michael Daniels-Vassallo. "The design process was frustrating at times but at the end of the day, it was incredibly rewarding."

Thousands of family members and friends filled the grounds of the U.S. Naval Academy (USNA), Aug 11, for Plebe Parents’ Weekend. 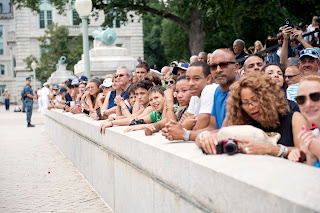 Plebe Parents’ Weekend, August 10-13, provides an opportunity for parents to reunite with their plebes (freshmen) after an intensive six weeks of Plebe Summer training that paves the way to a midshipman's freshman year at USNA.

It has been six weeks since they said goodbye to their sons and daughters and turned them over to the upper-class midshipman detailers for Plebe Summer training.

“Just after that first phone call, he was already different,” said Amy Brothers, mother of Midshipman 4th Class Graham Brothers. “His voice was different, the way he spoke was different. He went from being a mumbling teenager to carrying a conversation like a man.” 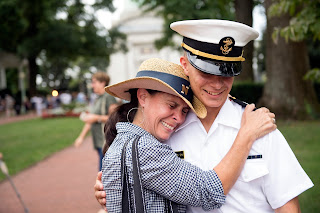 For the family and friends reuniting with their plebes, it can be shocking to see how much they have changed. Parents say that the new mannerisms their plebes have adopted make them seem almost unrecognizable. They stand taller and straighter, pivot around corners, address everyone as “sir" or "ma'am," and say things like, “where is the head?”

“When I saw him walking up today, I’m telling you, I can’t even explain the feeling of pride to see how much he has grown and matured,” said Mia Nelson, mother of Midshipman 4th Class Gj Nelson. “I’ve just missed him so much.” 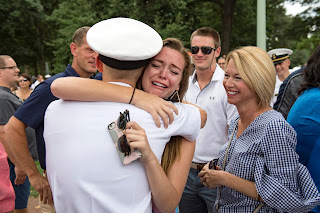 During the four-day weekend, parents are able to see the plebes in a formal parade, tour the dorms at Bancroft Hall, and meet with faculty and staff members to get a glimpse of life at the academy, and learn what to expect for their plebes during the upcoming year.

The Class of 2021 is composed of 887 men and 327 women from all over the United States and includes 15 international students from around the globe. The class also includes 60 prior enlisted service members from the Navy, Marine Corps and Army.

The Class of 2021 is scheduled to join the Brigade of Midshipmen during reform, Aug. 16-18. At that point, the plebes will move to their permanent company spaces in preparation for the academic school year.

See more photos from Plebe Parents Weekend on the USNA Flickr page.
Posted by Unknown at 9:51 AM No comments:

Every summer, the U.S. Naval Academy selects up to four first-class midshipmen for the Service International Summer Leadership (SISL) Scholarship, which allows midshipmen to design, plan, and execute an international and impactful service project abroad.

This summer, Midshipmen 1st Class Michelle Tran was selected for the SISL Scholarship and spent five weeks in Israel. 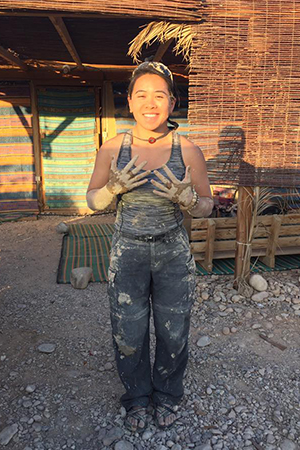 She found such an opportunity in the middle of the desert.

Israel, unlike the U.S. and most Middle Eastern countries, is one of the most water-efficient nations in the world. The country owes its successes to two variables: the creation of a central, apolitical body that oversees the nation’s water supply and national investment in water-efficient technology such as seawater desalination, drip irrigation, and wastewater treatment.

Tran sought to experience this unique environment herself and set off for Tzukim, a remote town in the Negev desert. For five weeks she and other international volunteers helped maintain an ecologically sustainable lodge and designed and built mud structures out of materials local to southern Israel. 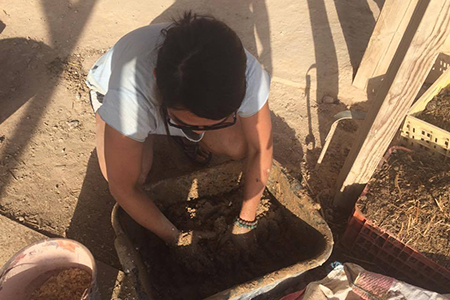 Throughout this experience, Tran identified inefficiencies in the lodge’s greywater treatment system and began drafting pipeline blueprints for construction in the fall and winter.

At the same time, she noticed that this eco-lodge possessed models for success, models that could be applied to developing communities around the world. During her free time in Tzukim, she interviewed academics at a local environmental institute to craft a study on the development, or lack thereof, of small businesses supporting eco-innovation, much like the lodge for which she worked. 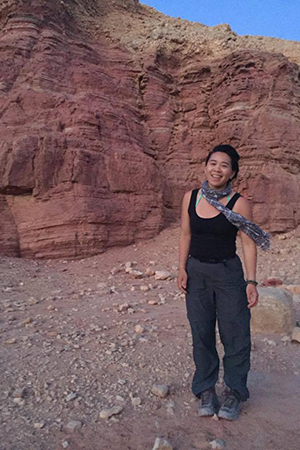 She also participated in a learning seminar for young Gazans, Jordanians, and Israelis concerning the food, energy, and water crisis in the Gaza Strip and the West Bank. From this experience, Tran employed system-based mapping software to more easily illustrate quantitative longevity models for commodities and industry such as water or energy or coastal fishing.

She hopes to use this software to improve project design for the Engineers Without Borders Club at USNA. At the end of her five weeks, Tran will continue her research in environmental sciences, specifically coastal flooding, at the Annapolis Office of Emergency Management.