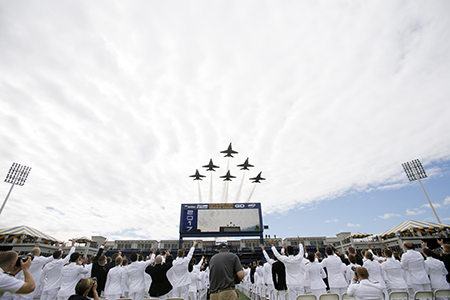 The graduating class includes 768 Navy ensigns and 259 Marine Corps second lieutenants. Among the graduates are two interservice commissions into the U.S. Air Force.

“You are joining a long and storied lineage,” said Carter. He referenced the Class of 1917 who a century ago graduated early to join the fight in World War I.

He also spoke about the Class of 1967 who 50 years ago graduated and went on to fight in Vietnam, returning home to civil unrest.

“Still they sacrificed, still they endured,” said Carter. “This legacy of selfless service continues today with the Class of 2017.” 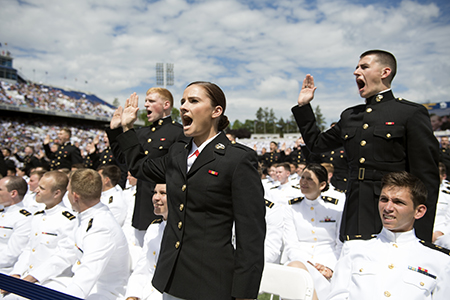 Carter went on to talk about the academic and athletic prowess of the graduating class.

In just its second season in a conference, Navy football won the AAC West Division title after sharing the division crown with Houston in its first year. Specifically, Navy’s senior class finished with a 37-16 (.698) record, the most wins by a class over a four-year period.

Eight Navy teams made it to the 2017 NCAA Apr Honors List.

The midshipmen also excelled on the community service front, giving approximately 25,000 volunteer hours to the local and national community. More than 500 midshipmen were involved in the Midshipman Action Group, which organizes more than 50 service projects throughout the academic year.

“I can state one indisputable fact: the Class of 2017 is prepared,” said Carter. “You are ready to join our Navy and Marine Corps team, to lead fight and win.” 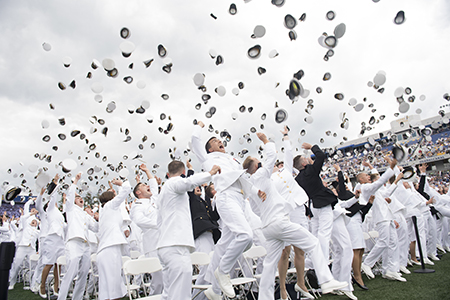 Pence encouraged the graduates to mentally write their own story, then “go live it.”

“Trust your training, and the principles you learned here, and you’ll have success. Remember that character is destiny,” he said. “Be men and women of integrity.”

“You bear the burden with honor, courage and commitment,” Pence continued. “All of you will be called to duty. Always remember you follow in the wake of heroes.”

Midshipmen from the U.S. Naval Academy's Midshipman Action Group (MAG) collected 477 pairs of shoes from the Class of 2020 to donate to homeless shelters in Washington, D.C., May 22. 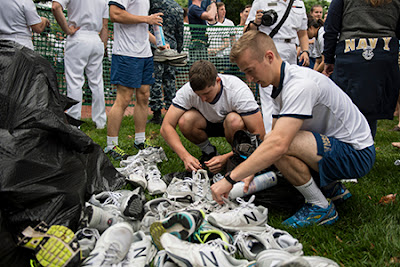 The shoes were collected as the plebes began the traditional Herndon Monument climb that marks the end of their plebe year. The plebe class left the shoes behind on Stribling Walk as they ran to begin the climb, while midshipmen from MAG gathered and sorted the shoes into pairs by size.

“The annual Herndon Shoe Drive shows its importance even during the excitement of a promotional ceremony,” said Midshipman 2/C Anna Kang. In the midst of an exciting and long-awaited day, the plebe class still takes time to donate “sneakers for someone else in need.”

The midshipmen bagged the shoes and transferred them to a van to take them to the regional Catholic Charities chapter where they will be distributed to families in need.

“Although the drive itself is short and shadowed by the Herndon Climb, the piles of shoes themselves show that giving to the community is not overlooked,” said Kang.

The Midshipman Action Group was established in 1992 and is supported by the U.S. Naval Academy Alumni Association and Foundation. MAG organizes more than 50 educational, environmental and social service volunteer projects on the local and national level, employing more than 500 midshipmen throughout the academic year.

Each year, the midshipmen contribute approximately 26,000 hours of community service.
Posted by Unknown at 11:53 AM 4 comments:

U.S. Naval Academy midshipmen from the Class of 2020 conquered the final hurdle of their freshman year during the annual Herndon Monument climb May 22.

Every year, the roughly 1,000 members of the academy's plebe class form a human pyramid around the 21-foot tall Herndon Monument to remove a plebe hat, or "dixie cup," that upperclassmen have placed on the top of the obelisk monument and replace it with the midshipman cover.

This year, Midshipman 4th Class Joe McGraw, a political science major, reached the top and replaced the cover in 2:21:21. 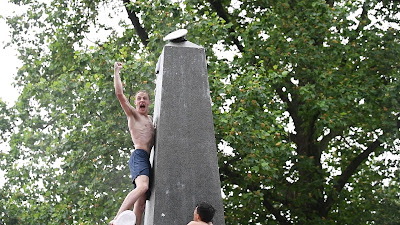 According to legend, the plebe who replaces the plebe cover with the midshipmen's cover will become the first member of the class to become an admiral. So far, the legend has not come true.

The Herndon Climb is considered the capstone of the freshman year at the Naval Academy. Once the freshman class completes the obstacle, they are "plebes no more", a phrase that the class doesn't take lightly. 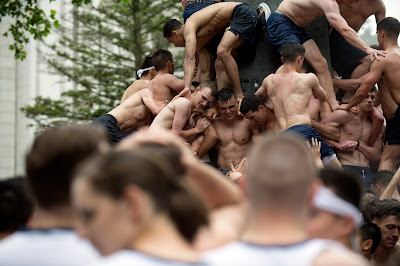 The Herndon monument is dedicated to Cmdr. William Lewis Herndon, who died in an attempt to save the crew of his steamer ship Central America during a storm off Cape Hatteras, North Carolina, in 1857.
Posted by Unknown at 9:41 AM 5 comments:

Midshipmen from the U.S. Naval Academy’s Class of 2020 endured 14 hours of rigorous physical and mental challenges during the annual Sea Trials training exercise May 16.

Sea Trials is modeled after the Marine Corps’ Crucible and the Navy’s Battle Stations recruit programs and is a “capstone” event for the plebes. 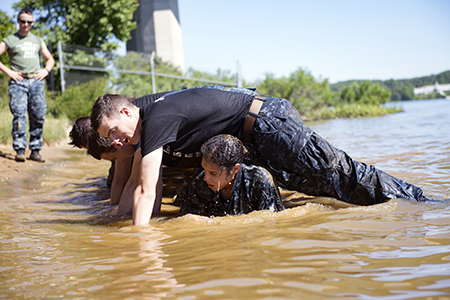 “The goal of Sea Trials is to build teamwork,” said Midshipman 1st Class Hanna Gillcrist, this year’s Sea Trials executive officer. “We want to build that camaraderie between classmates right before they go to their summer training.”

The day started at 3 a.m. with a physical training warm-up to help get the plebes ready for the strenuous activities ahead of them. 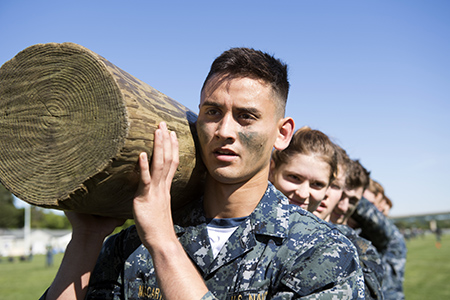 “At the log PT station, we split them up into groups and show them how to correctly and safely lift the logs and then have them do exercises such as squats while holding them,” said Midshipman 2nd Class Shelby McCool, station commander for log PT. “It’s really all about the teamwork. They have to squat down together as well as come back up together. So it’s an exercise that won’t work unless they work together.”

The exercises took place at different locations throughout the Yard and Naval Support Activity Annapolis. Events included a variety of physical challenges that simulate situations naval and Marine officers might encounter in the fleet.

“Being on the other side of things now has really allowed me to see just how the different events and exercises shape the camaraderie and teamwork of the plebes,” said Midshipman 2nd Class Nene Yutakum, a company executive officer. 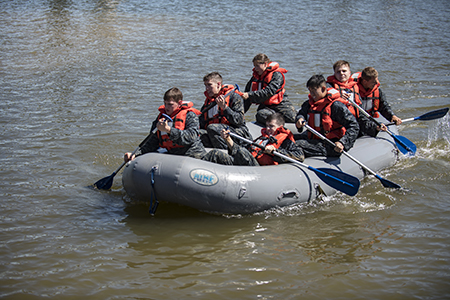 The overall exercise is designed to test the plebes' teamwork and reinforce their bonds as a company and class, while also providing a leadership challenge for the upperclass midshipmen who lead each station.

Each year, the company of plebes who demonstrates the top unit performance through endurance and spirit during Sea Trials is recognized with the Iron Company award at an evening ceremony. This year, the award went to 29th Company. 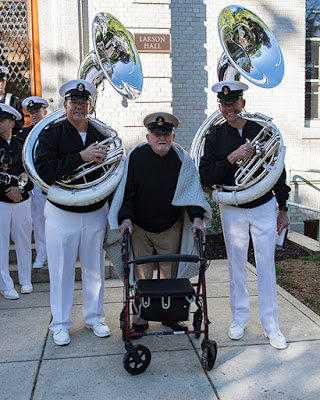 MUC (ret.) Peter Lisko visited the academy to witness the band play at morning colors. Members of the band also presented him with a USNA Chiefs' Association coin.

The Navy stationed Lisko on board USS Honolulu (CL 48) out of Pearl Harbor, HI, and on December 7, 1941, Lisko survived the Japanese attack on Pearl Harbor. Though Honolulu did not sink that day, the Navy elected to disband the musicians attached to the ship. Lisko’s new orders stationed him on board USS Helena (CL 50), the ship on which his brother, Aleck, performed and served.

Playing together on board Helena, the musician brothers observed the ship’s integral participation in the Guadalcanal campaign. Lisko saw Helena thwart the advancing enemy fleet and prevent Japanese troops from landing on Guadalcanal. He watched his ship sink the Japanese heavy cruiser Furutaka and destroyer Fubuki and witnessed Helena rescue 400 members from USS Wasp (CV 7).

Sadly, Peter and Aleck Lisko witnessed together the sinking of USS Juneau (CL 52), the famous ship that took with it the lives of the five Sullivan brothers.

On July 6, 1943, after repairs in Australia following the Guadalcanal campaign, Helena finally sank during the Japanese attack in Kula Gulf. Lisko recounts being knocked unconscious early in the Japanese engagement. By the time he regained his faculties, only one of his shipmates remained on board out of the original nine-hundred officers and enlisted men stationed on the Helena. Lisko quickly realized his companion could not swim. Forced to compartmentalize the stress of the unknown whereabouts of his brother, Lisko waited until the absolute last second, placed the remaining crewmember on his back, and swam to the nearest life raft.

Lisko remembers floating on the life raft for three days while the survivors attempted to propel themselves towards the Island of Vella Lavella. Once they reached shore, Lisko discovered that his brother had died the day before while attempting to hold onto the side of another liferaft. The survivors on the beach evaded into the jungle line, and remained hidden for eight days until friendly forces rescued them on July 16, 1943.

Lisko returned to the U.S. with orders to the U.S. Naval Academy. He performed with the  Naval Academy Band, eventually earning the title of Band Director. On April 16, 1959, Lisko made Chief before retiring from 20 years of distinguished naval service.

He became a park ranger for the state of Maryland and dedicated the next 20 years of his life to the park ranger service. He continues to live here in Annapolis.

MIDN 1/C Megan Rosenberger was inducted into the Carson Scholars Fund Hall of Fame in a ceremony April 30.

The CSF Hall of Fame honors outstanding Carson Scholar alumni who are representative of CSF's mission - those who have continued to excel academically and made significant contributions to their communities. 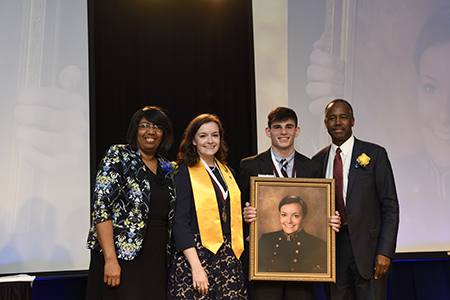 Prior to attending the Naval Academy, Megan was a recipient of the President’s Environmental Youth Award and was crowned Miss Teen Earth Pennsylvania.

She is passionate about bringing awareness to the world’s water crisis, which led her to create Barrels by the Bay, a nonprofit organization aimed to educate students about water resources and demonstrate the importance of utilizing rain barrels.

She also works with USNA's Midshipman Action Group and serves as a project leader for the annual Harvest for the Hungry food drive, which raised a record-breaking 80,000 pounds of food in 2016.
Posted by Unknown at 3:18 PM 9 comments: