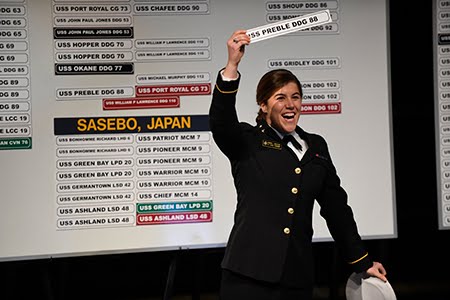 “For SWO selects, this is the single biggest moment of their time at USNA other than commissioning,” said Lt. Nick Driscoll, Ship Selection Coordinator for 2017. “This is a unique opportunity for these Midshipmen to hand select their ship and homeport. From now on, their time in the Navy will be spent putting in preferences and crossing their fingers that they get what they requested.”

“No matter what ship everyone chooses, we are all here to support the overall mission of sea control,” said Midshipman 1st Class Jacob Wirz, who made the night’s first selection of USS Porter (DDG 78) homeported in Rota, Spain. “It’s a great fun-filled night, but this is just the beginning. We are still continuing to prepare and train for the challenges we will face when we arrive at the ships we’ve chosen.” 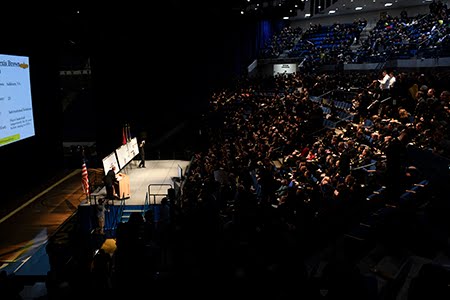 “Give it everything you’ve got,” said Rowden. “The men and women you will be leading will look to you for guidance. The Naval Academy has given you the best training and the best foundation you can be provided. You have all the tools in your tool kit to do the best you can at your job.”


During summer cruises midshipmen embark upon Navy ships to get more experience as junior officers. Commanding officers of those ships can offer “blue chips” to midshipmen who especially impress them, which give them an automatic spot in that wardroom if they choose to take it. Midshipman 1st Class Samantha Young was offered one for USS America (LHA 6) out of San Diego, Calif.

“I’m beyond excited I was able to select the ship I wanted,” said Young. “USS America is deploying in July, and I’m excited to get there and try to make a positive impact on the crew.”

After choosing their ships, future junior officers continue to hone and develop their leadership and professional knowledge to prepare for their first duty assignments.

“I’m going to take a little time to be around my friends and classmates. It’s coming down to the last time we will all be together,” said Midshipman 1st Class Taylor Kipilli, who selected USS Port Royal (CG 73) out of Pearl Harbor, Hawaii. “But I’m still honing my leadership skills so I can bring the best me to the ship when I get out there.

The Class of 2017 will graduate and receive their commissions May 26.
Posted by Unknown at 10:22 AM No comments:

Rosenberger is the first midshipman to receive this prestigious award as well as the youngest recipient in Anne Arundel County. 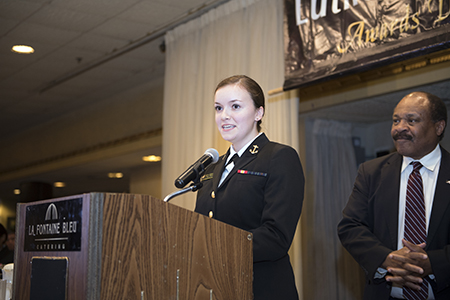 Founded in 1988, the Dr. Martin Luther King Jr. Committee was designed to honor Dr. King’s legacy in Anne Arundel County. The MLK Drum Major Award is a way to celebrate those who perform extraordinary everyday acts of service with reliability and commitment but seldom receive recognition.

The award was inspired by King’s famous sermon about the drum major instinct. According to King, people with this trait desire to be out front, leading others.

King asked to be remembered as one who tried to live his life serving others. He implored his congregation to remember his attempts to feed the hungry, clothe the naked, and comfort prisoners.

“To me, Harvest for the Hungry was the most memorable and the most inspiring event of 2016 because of the amount of midshipmen that got on board and wanted to help,” said Rosenberger. “I was honored to be there and just watch all of it happen.”

Rosenberger has been a member of the Harvest for the Hungry team all four years she has been at USNA and has overseen the collection efforts the past two years as project manager. Since she became involved with the program in 2013, USNA has collected more than 250,000 pounds of food for the Anne Arundel Food and Resource Bank. This past fall, Megan and her team collected a record-breaking 80,000 pounds of food for Harvest for the Hungry.

Even with a rigorous course load and the military demands of being a midshipman, Rosenberger has always made giving back to the community a priority. Growing up, her grandfather was involved in his local community in any way he could be, which instilled a sense of service in Rosenberger from a young age.

“Growing up and seeing him be so selfless brought about a culture of service in our family,” said Rosenberger.  “To come to the Naval Academy and continue different service projects and get involved in MAG just seemed right, because my family always made that a priority.”

“From her very first days at the Naval Academy,  Megan has been caring for our greater Annapolis communities by tirelessly doing for others and by building hope with every step of her impactful community engagements,” said Miriam Stanicic, USNA community relations director and former recipient of the MLK Drum Major Award. “We could not be prouder of her resounding leadership.”

Dr. King once said, “Life’s most persistent and urgent question is what are you doing for others.”

For Rosenberger, the answer to this question is impacting and encouraging peer leadership, teamwork and goodwill towards others through her tireless devotion to her local community.
Posted by Unknown at 10:25 AM 1 comment:

A U.S. Naval Academy midshipman received the Navy and Marine Corps Medal Jan. 10 in front of the entire Brigade of Midshipmen assembled in Alumni Hall.

Midshipman 3rd Class Jonathan Dennler received the medal, the highest non-combat decoration awarded for heroism by the U.S. Department of the Navy, for heroic actions while leading a Boy Scout troop in July 2016. 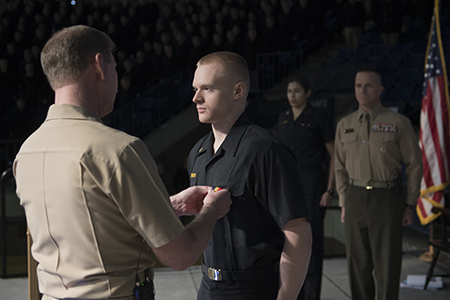 While camping in Quetico Provincial Park in Ontario, Canada, the troop experienced a major storm with up to 80 mile-per-hour gusts and lightning strikes. Two trees fell on the campsite, killing a scout and an adult volunteer and severely injuring others.

When Dennler couldn't contact anyone on the radio for help, he canoed more than 1.5 miles at night in 60 mile-per-hour winds to a ranger station to bring back help and medical supplies.

The Navy and Marine Corps Medal falls in order of precedence just below the Distinguished Flying Cross and above the Bronze Star. It was first bestowed during World War II, to then Lt. j.g. John F. Kennedy. Only about 3,000 have been given since. To win this award, there must be evidence that the act of heroism involved very specific life-threatening risk to the awardee.

The award came as a surprise to both Dennler and his classmates, who listened in silence while academy Superintendent Vice Adm. Ted Carter read the award citation then gave him a rousing standing ovation. 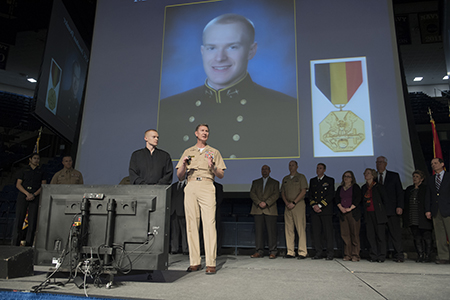 “It was an incredibly humbling and unexpected experience,” said Dennler. “I'm very thankful to everyone who helped to make that happen and for the support of my family and friends.”

The award wasn’t a surprise to his parents, who also attended the award presentation. Dennler’s mother, Monica Dennler, described her son as “persistent and tenacious.”

“He knows how to persevere and has a kind heart,” she said. “He was the only one who knew what to do back in high school when a classmate broke their leg at a basketball game, because he was an Eagle Scout.”

“He is a quiet young man who would not want a big fuss, but rightfully deserves it,” said 20th Company Senior Enlisted Leader Chief Electronics Technician Nicholas Howell. “Out of his classmates, he is the one who has the level head to think clearly and decisively act to contain the situation and help bring about the best possible solution.”

Dennler is a political science major and member of 20th Company. He completed two years of college at George Washington University before transferring to the Naval Academy.

“USNA has taught me how to work and think in environments where many things are out of my control, and I think the academy helps to create mindsets that put others first,” said Dennler. “I am incredibly thankful for those lessons.”

An active member of the academy's Semper Fi Society, he hopes to serve in the Marine Corps after graduating from the academy in 2019.
Posted by Unknown at 2:42 PM 6 comments: