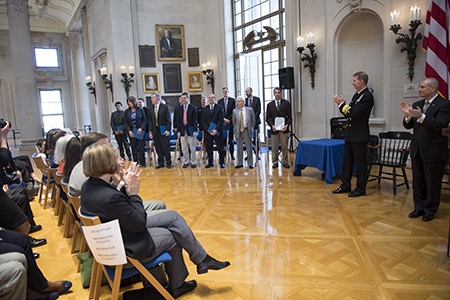 Congratulations to our awesome faculty on their promotions!

From the USNA International Programs Office

Giornelli, from 26th Company, was selected to participate in this event due to the three years he spent studying the Japanese language at the Naval Academy. 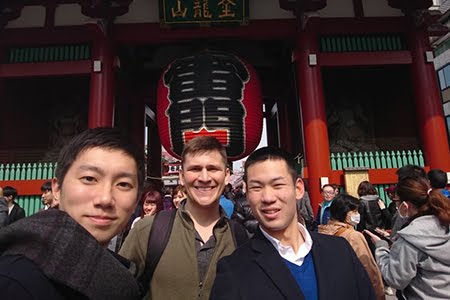 The International Cadets Conference is week-long conference that the National Defense Academy has hosted since 1998. Cadets from countries all around the world are invited to the conference to discuss global security and build mutual understanding.

The topics discussed at this year’s International Cadets Conference related to leading in the changing battlefields of today’s wars: Leadership in Joint Operations, Multinational Operations, Cyber Security, and Anti-Terrorism. Giornelli was assigned to the session discussing leading in joint operations.

“We were required to discuss how our academies prepare us for leading these operations, but before this conference I really didn’t know too much about them,” said Giornelli.

Giornelli was the only student from his group who came from a non-joint academy.

“I ended up talking a lot about how our school prepares us to work in an environment with both Sailors and Marines, like a Marine Expeditionary Unit. I think it’s the most likely joint operation an academy graduate would be assigned to.”

The conference also provides opportunities for foreign cadets to experience the Japanese culture. On their first day at the conference, all cadets and midshipmen took part in a traditional Japanese tea ceremony, performed by the Tea Ceremony Club of the NDA.

The tea ceremony is a way Japanese hosts welcome guests into their home that dates back Muromachi period (1336-1573). The host ceremoniously brews a cup of green tea, called matcha, and serves it to his guests.

The next day, the cadets and midshipmen experienced a traditional form of Japanese comedy called Rakugo. It is similar to western stand-up comedy, where a single performer called a rakugoka tells humorous stories while kneeling politely in the seiza on stage using only a single fan as a prop.

The visiting midshipmen and cadets also participated in sports and club activities every day. 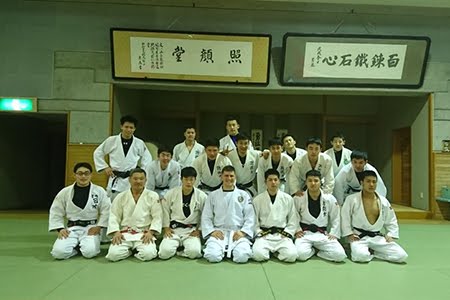 “After the conference work was over for the day, we were given free reign to workout with whatever club or team we wanted to,” said Giornelli. “I am actually the president of the Navy Judo club back at the academy, so I got to work out with their Judo team. Everyone there was so kind to me, letting me walk in on their practices and work with them. They had some intense workouts. In fact, I got to work with one of their best players, who’s the current collegiate champion in Japan.”

He also visited the Sensoji Temple, a Buddhist temple in the Asakusa district of Tokyo that serves as a large tourist attraction while remaining an operating temple. It is famous for its incense burning around the area, which according to legend, can make those who breathe it in smarter.

Giornelli’s Japanese hosts then took him to the city of Yokohama, just south of Tokyo. Yokohama is a famous port city in Japan, and one of the first to open its doors to all westerners after the arrival of Commodore Perry in the 1850s. As such, the Japanese consider it to be a very westernized city, in contrast to the traditional Asakusa district. They visited the Japanese Coast Guard Museum there, where the remains of a captured North Korean spy ship is held.

“This conference was one of the best experiences of my life. I made friends from around the world, and learned a great deal about other services around the world,” said Giornelli. “I am incredibly grateful for the opportunity to participate in the International Cadets Conference, and I hope to work with my new friends in future operations someday.”

Family, Intensity, and Loyalty: How Navy Women’s Hockey is Breaking Molds and Heading to Nationals

The Navy Women’s Hockey team is a program less than a decade old and boasts a roster where less than 50% of the team ever stood on the ice before their freshman year. This year, for the first time ever, the American Collegiate Hockey Association’s National tournament has the Navy women on their radar. The team advanced to nationals in February and will compete next week in Columbus, Ohio. 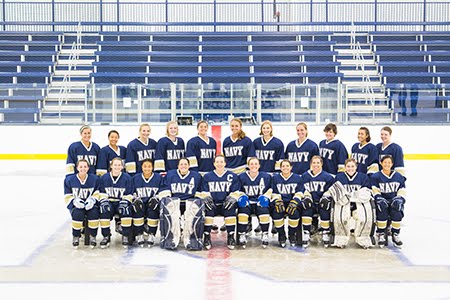 Upon their arrival, more than a few heads are going to turn - not because of their hockey style, but because of their lifestyle. Simply put, the soon-to-be junior officers in the United States Navy and Marine Corps don’t put the game of hockey at the top of their priority list. That spot is reserved for each other.

They are a family, through and through, headed by their team captain MIDN 1/C Claire Clark.


“The defining element of this program is the team culture. Our success on the ice this season is a direct product of a team environment where selflessness and loyalty are valued above all else," said Clark. "The game itself is infinitely more fun when we just get out there to play for each other and nothing else." 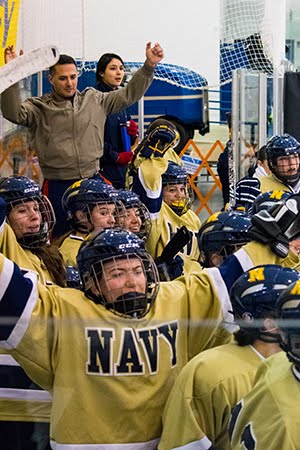 “I grew up playing soccer and the thought of playing hockey never crossed my mind," said Cameron." When the captain of the hockey team my plebe year, a 1/C in my company, offered to throw me in skates, I was hesitant. The instant I walked into the locker room I knew something about this team was different. It wasn’t about the hockey. Sure, the hockey brings the group of girls together, but we are a team of sisters because we care about the person under the gear.”

When observing the team from the sidelines and bleachers, the program is clearly a strong regional competitor despite the fact that the majority of the players have skated less than three years. The team only recently made “club” status, and only two years ago they dressed out in an industrial concrete back room with no place to store their cold, wet gear.

They soon graduated to a conference room, eventually finding a home in the locker room they have now. At first glance, this team’s rapid development and competitive successes are hard to believe; they shouldn’t be the nationals-bound team they are. Yet here they are, establishing their legitimacy as a high-caliber team by putting up fights and even defeating women who are quite literally twice their size. 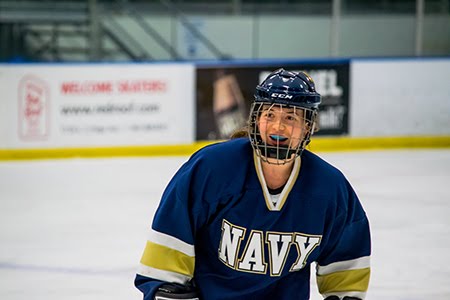 What makes them different, of course, is what happens on the benches and in the locker rooms, and even back inside Bancroft Hall. The team fosters a nurturing atmosphere, one of mentorship and benevolence, bestowing hard-won wisdom upon the underclass midshipmen as they mature. When each woman gets on the ice, she doesn’t have to worry about what’s going on in her personal life. No matter what, her teammates have her back. It’s not about hockey; it’s about learning life and basic leadership through hockey.

The unique thing about them is that their competitive drive already governs their behavior on and off the ice, thanks to the selection process of the Academy. The team culture need only mold, not forge, the women to create intense loyalty to one another and their team, fostering a teamwork mentality coaches can only hope for. These women may be loud, vivacious, compassionate, and unassuming - and if you step on the ice on any given day, they’ll show you the Navy Women’s Hockey way.

Back to the basics: selflessness, loyalty, intensity. NWH is a family through and through.

The Navy's top submarine commander welcomed the future submariners of the U.S. Naval Academy's Class of 2017 to the fleet at a dinner and reception Feb. 27.

Commander, Submarine Forces, Vice Adm. Joe Tofalo addressed the 134 first-class midshipmen who were selected to be submariners about the current and future capabilities status of the submarine community. 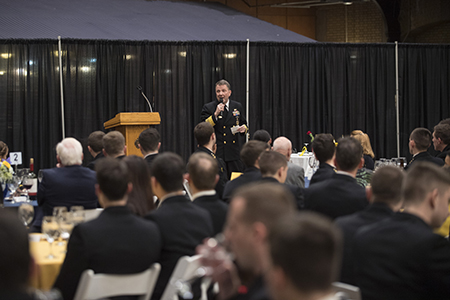 "You are the future of the submarine community, and we need you to ... step up to be part of this legacy we have," said Tofalo. "If you think about a submarine, there is not one single defensive weapon on a sub. We are all teeth."

Tofalo said that during World War II submarines made up less than 2 percent of U.S. Navy forces but were responsible for about 55 percent of maritime losses.

"Now submarines are responsible for over 50 percent of our nation's nuclear weapons," he said.

The assignment dinner is an annual event and represents a unique opportunity for the midshipmen to meet fleet submarine officers and be welcomed into the community.

"All of these senior submarine officers are here tonight, because they want to be here with you," said Naval Academy Superintendent Vice Adm. Ted Carter. "I am thrilled you are here tonight. This is a special community. The past warrior spirit of the Navy is here, and I believe the future of warfare is here in this class of 2017."

"It’s exciting because we are offered a perspective at the highest level," said Midshipman 1st Megan Hartman. "We get an overall view of what the submarine community is doing as a whole. It’s really valuable to have them here giving an overarching picture of the community they are welcoming us into."