Send us your Army-Navy photos!

Now that we've all had some time to recover from the pain of loss ... we're looking for your Army-Navy photos! 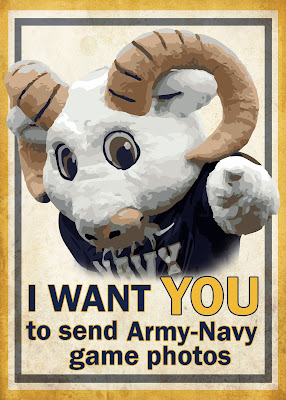 Over the next few weeks, while the midshipmen are on winter break, we'd love to feature your A-N photos on our social media sites! Please submit your photos to jlclark@usna.edu with caption and credit info and we'll post as many as we can!

Happy holidays, everyone, and here's to beating Army next year!
Posted by Unknown at 1:50 PM 1 comment:

The Naval Academy received its third Meritorious Unit Commendation from the secretary of the Navy Dec. 8.

The Honorable Ray Mabus presented the citation to the Brigade of Midshipmen, faculty and staff during a ceremony held in Mahan Hall on the Naval Academy Yard. 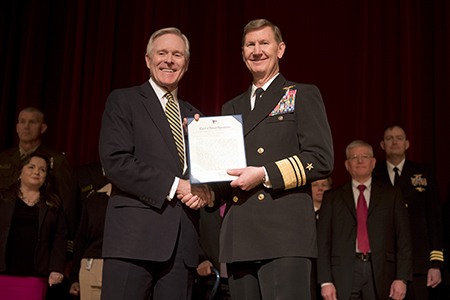 The award recognized the academy's significant achievements from Aug. 1, 2013 to Oct. 1, 2015. The Meritorious Unit Commendation recognizes superior mission accomplishment and is comparable to achievements which would merit the presentation of a Bronze Star Medal to an individual.

The award, signed by Chief of Naval Operations Adm. John Richardson, specifically cited the establishment of the academy's "flagship cybersecurity" program, including required cyber courses for all midshipmen and the development of the cyber operations major.

The award also recognized the Naval Academy's U.S. News and World Report rankings during that time period as the "#1 Top Public School," the "#9 Liberal Arts School," and the "#5 Best Engineering School."

According to the citation, the academy "increased its applicant pool by 60 percent, while admitting the highest number of female and minority candidates in its history. In addition, the academy won a record number of league titles, earned numerous national awards for athletes and coaches, and was awarded the Patriot League President's Cup for the best school in conference for the third time in four years." 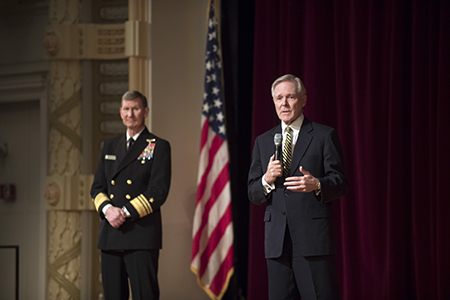 During the presentation, Naval Academy Superintendent Vice Adm. Ted Carter invited a number of faculty, staff and athletic coaches to the stage.

"This is a complex organization," said Carter. "There are so many people here who make our mission run. These are critical leaders in every element of the Naval Academy.

"We are very honored that the Navy has recognized the Naval Academy with such an award on behalf of this incredible group of professionals," Carter continued. "I am so proud to be a very small part of of this institution and lead everyone from our faculty to our staff to those who take care of the midshipmen to those who run the ships and sailboats - to every aspect of this Naval Academy."

The last time the Naval Academy received the Meritorious Unit Commendation was in 2008.
Posted by Unknown at 2:58 PM 9 comments: