The U.S. Naval Academy welcomed the 1,184 men and women of the incoming Class of 2020 in Annapolis June 30 during Induction Day.

Induction Day - or I-Day - marks the beginning of a demanding six-week indoctrination period called Plebe Summer, during which civilian students are indoctrinated into military life. 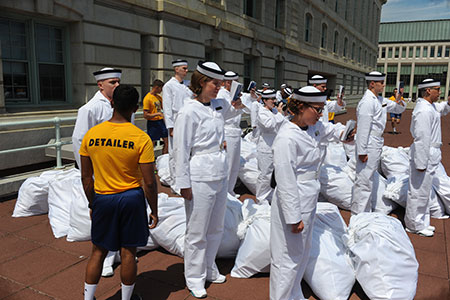 This indoctrination period is meant to help plebes develop discipline, honor, self-reliance and organization. These attributes will provide them with the foundation they will need to be successful midshipmen and throughout their military careers.

"Today is a really special day for these guys and girls," said Midshipman 1st Class Ryan Bailey, one of the Plebe Summer detailers who will be training the plebes. "We've all been through it so being on the other side now, it's pretty cool to experience it again from a different viewpoint."

The new class includes 853 men and 331 women - making up 28 percent of the incoming students. This is the largest number of women to be inducted into the Naval Academy in the 40 years since women were first admitted.

Seventy-five of the incoming plebes are prior enlisted personnel, 66 from the Navy and 9 from the Marine Corps.

On I-Day, the new plebes receive uniforms and military haircuts, undergo medical evaluations, learn to render a salute, and complete their registration.

Each plebe receives a copy of "Reef Points," a 225-page handbook of information about the U.S. Navy and Marine Corps, the Naval Academy's history and traditions, their administrative chain of command, and the general orders of a sentry. The new midshipmen are required to memorize approximately 1,000 facts outlined in the book. 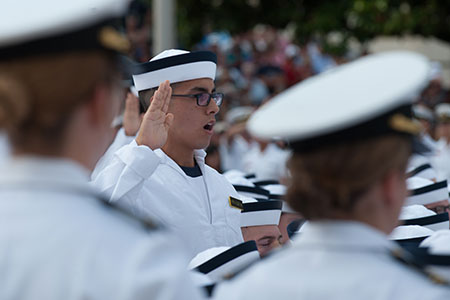 I-Day concludes when the midshipmen take the Oath of Office in front of their family, friends and new classmates during a ceremony in Tecumseh Court. After the ceremony, plebes say goodbye to their families who will not see them again until Plebe Parents Weekend, Aug. 11-14.

During these six weeks, the plebes are led and trained by upper-class midshipmen. Instruction includes seamanship, boat handling, navigation and small arms training.

"During plebe summer, these young men and women will be challenged morally, mentally and physically," said Naval Academy Superintendent Vice Adm. Ted Carter during a presentation to the plebe parents. "It will not be easy, but Plebe Summer applies pressure with a purpose."

The strict atmosphere instills a drive in the students to excel both in and out of the classroom. 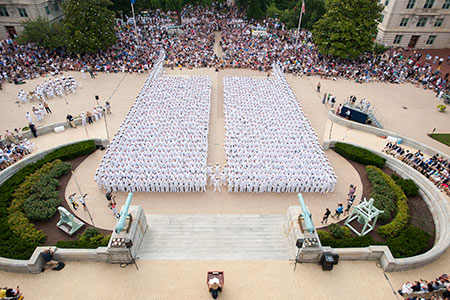 "We recognize the talent that is in your sons and daughters," said Carter, addressing the parents of the incoming plebes. "They could have gone to Ivy League schools or any other service academy. They had choices and they chose to join the U.S. Navy."

Carter said that the outstanding cumulative SAT scores, athletic prowess and diversity of extracurricular activities of the class of 2020 were some of the best he had ever seen and told the parents they should be proud as they watch their sons, daughters and family members depart for their four-year adventure at the Naval Academy.

"His freshman year of high school, he told me he wanted to be a Marine and attend the academy, this is truly his dream," said Anne Pastrana, mother of an incoming plebe. "As a mother I couldn't be more proud to see my son living out his dream."

The incoming plebes that comprise the class of 2020 represent some of the brightest youth in the country and will one day become part of the less than one percent of the population who volunteer to serve their country, said Carter.