The presentation was designed to educate the Brigade of Midshipmen about the future of space flight and exploration from leaders in the field. 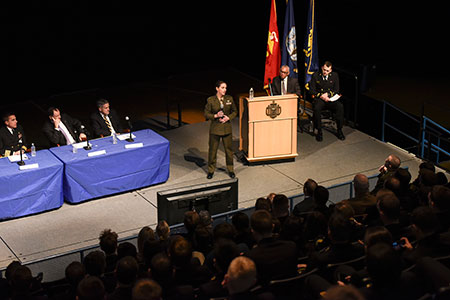 “You are the future, and you are the people who are going to take us to Mars one day,” said Marine Maj. Nicole Mann (USNA ’99), NASA newest astronaut and test pilot. “The good news is there is not just one way to get there so whether you become a submariner, surface warfare officer or you go aviation, that opportunity is there for the taking.”

“When Apollo launched, the Kennedy Space Center was a single-user platform,” said retired Marine Col. Robert Cabana (USNA’71), director of NASA’s John. F. Kennedy Space Center. “Now it has become and continues to expand into a multi-user platform – restoring buildings, launch pads and other areas once used only by NASA and now allowing commercial business to come in and use these areas to help develop new technology for human exploration in space.”

In addition to the growing commercial spaceflight business, the panel showed the midshipmen how advancements in robotics are playing an important role in space, creating a safer environment for astronauts to operate. 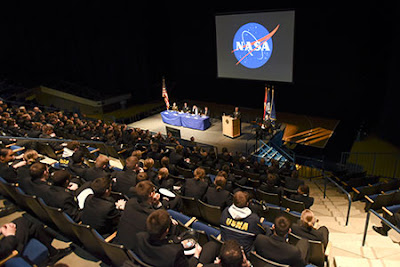 “We have been testing robotics that will be able to go outside of the space station and do maintenance,” said Capt. Chris Cassidy (USNA '93), chief the NASA Astronaut Office. “It will not require us to put an astronaut outside.”

The astronauts also took the time to share their own experiences in becoming part of the space program. For Cabana, the goal of becoming an astronaut came later in his career. He credited his time at the Naval Academy for helping him achieve this accomplishment.

“I never thought I would be an astronaut,” said Cabana. “It was something I would have liked to do, but I just wanted to fly. There were several moments I could have given up and taken a different path but what I learned here at the Naval Academy prepared me to face those challenges. Now, when someone asks me, ‘How do you become an astronaut?’ I say persistence.”

The annual convocation provided an opportunity for mids interested in the space program to meet professional astronauts who began their own careers as Naval Academy midshipmen.

“Who didn’t want to be an astronaut when they were young?” said Midshipman 1st Class Nick Skeem, aerospace engineering major. “This was a great opportunity to talk with a few of them and listen to their experience and advice.”