Sponsored by the U.S. Air Force, the UNP selects just 10 universities to design and build their own satellites over two years under a sponsored research grant of up to $200,000.  At the end of two years, the projects are judged and the winning satellites are selected for launch into space. 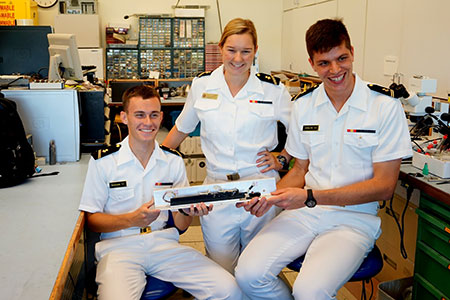 Conceived by Midshipman 2nd Class Edward Hanlon and initially funded by a scholarship awarded to Hanlon by the Stamps Family Charitable Foundation, AMODS offers a cost-effective way to provide diagnostic, repair and maintenance services to spacecraft in orbit.

“Spacecraft cannot return to Earth for repair,” said Hanlon. “Unless you have a team of astronauts, a launch pad and $300 million available, even simple, non-catastrophic failures can cripple a satellite and severely impede research efforts.”

AMODS proposes to overcome this frustrating challenge using a fleet of 3U Cube Satellites (spacecraft about the size of a grapefruit) consisting of one transport unit, called BRICSat, and several repair units, called RSats. While BRICSat will be able to transport and navigate itself through space, RSat is equipped with robotic arms and manipulators, allowing it to securely and harmlessly latch onto and spider around another spacecraft in order to perform diagnostics and repairs.

“In building these spacecraft, AMODS is originating innovative advancements with respect to propulsion and navigation of small satellites, not to mention that RSat represents the first time space robotic arms have been installed on platform this small,” said Hanlon. 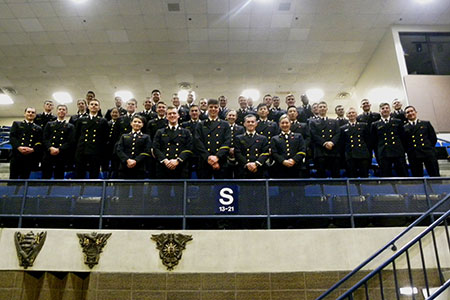 Boasting a team of nearly 70 midshipmen, AMODS is the largest project ever developed within the academy’s Small Satellite Program. The team launched its first spacecraft in May 2015 and will launch three more satellites over the next three years.

In addition to Hanlon, AMODS is helmed by Midshipmen 2nd Class Morgan Lange and Ben Keegan. Midshipmen 3rd Class Eryn Culton and Jacob Pittman are leading the development and build of the transport unit, BRICSat. Dr. Jin Kang, of the academy’s Aerospace Engineering Department, is the program’s official faculty advisor, though Hanlon says they have been receiving valuable input and suggestions from many USNA faculty.

“The AMODS team has its hands full, but it’s certainly a worthy goal,” he said. “A successful AMODS will prove invaluable to extending the life of spacecraft and the effectiveness of humans in space.”
Posted by Unknown at 3:23 PM