Two midshipmen recently traveled to the Indian Naval Academy in Ezhimala, India where they proudly brought the Admiral’s Cup trophy back for the United States. 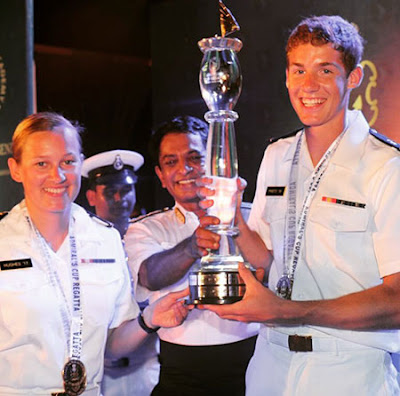 The Admiral’s Cup Sailing Regatta is an international event that began in 2010. The event hosts sailors from the world’s military academies as they compete in the laser radial class.

Representing the Naval Academy at this event was Midshipman 2nd Hannah Hughes of 15th  Company and Midshipman 3rd Class Gary Prieto of 29th Company. Both midshipmen sail on the Navy intercollegiate sailing team and have been racing in the laser class for numerous years.

Hughes won the women’s fleet and Prieto took second in the men’s fleet. Their combined score was enough to take home the overall victory. 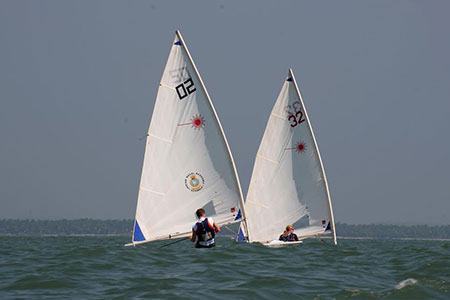 Although they sadly had to miss this year’s Army-Navy football game, the experience in India was well worth it. Both will be able to cherish the proud memory of holding the Admiral's Cup up as fireworks were fired off in the background and knowing that the Admiral’s Cup belongs to Annapolis now.

“The regatta went beyond just sailing. They also had cultural programs and tours for us,” said Huges. “It was an amazing event, and being able to bring home the trophy was a wonderful feeling.”

The Admiral’s Cup was truly an amazing testament to the talent of midshipman on and off the water. Be sure to keep track of Hannah, Gary, and the intercollegiate sailing team as they try to keep the victory streak alive this season!