The assistant commandant of the Marine Corps was the keynote speaker at a dinner and reception Feb. 4 honoring the future Marine officers of the U.S. Naval Academy’s Class of 2016. Gen. John M. Paxton Jr. addressed the 269 first-class midshipmen who were selected to serve as Marine ground officers and aviators after graduation and offered advice and insight about the expectations for their future. 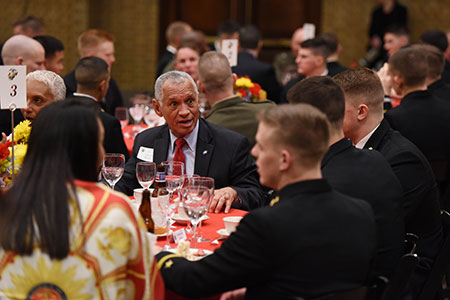 “This is a celebration of the midshipmen who have gone above and beyond the cut, have been tried and tested and want to be a different breed,” said Col. Jon M. Aytes, director of the academy’s Humanities and Social Sciences Division. “We welcome them to the Marine Corps by sharing a wealth of experience and knowledge. We want to epitomize what Lt. Gen. Lejeune often emphasized – not a superior and subordinate relationship, but teacher and scholar mentorship.”


The assignment dinner is an annual event that provides a unique opportunity for the midshipmen to meet senior Marine officers and be welcomed into the community.

The Naval Academy Class of 2016 received their service assignments Nov. 19, a milestone that put them one step closer to joining the fleet and Marine Corps as commissioned officers. After graduation May 27, these midshipmen will attend training the Basic School in Quantico, Va.

“It’s really amazing we have this many of the most senior leadership here to speak with us,” said Midshipman 1st Class Nick Sloan. “We have combat veterans from all ranks with us tonight, welcoming us into their ranks. It’s inspiring.”
Posted by Unknown at 6:00 AM