The meet brought midshipmen and alumni fencers, representing classes ranging from 1960 to 2013, together for competitive matches that tested each other’s wits and skills. 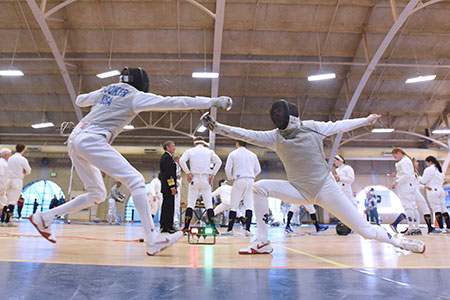 “It's special to watch the future leaders of our Navy carrying on the proud legacy of fencing at the Academy," said Harris. "Fencing instilled in me a sense of focused aggression, not just individually, but as part of a team, something that has been valuable to me throughout my career."

The annual event has taken place for the better part of the past 40 years.

“The alumni meet dates back to the 1970s, perhaps the late 1960s,” said Capt. Emil Petruncio, head coach and officer rep of Navy Fencing. “There was a hiatus after the varsity fencing program was terminated in 1993, but fencing re-emerged as an organized activity in 1999, and it was just a few years later - 2001 or 2002 - that the alumni meet was reinstituted.”

This year’s meet welcomed three USNA Athletic Hall of Fame fencers. Among them, Frank Hewitt (USNA ’67) explained fencing as a way to not only stay healthy, but build teamwork skills.

“Team sports like this help midshipmen when they go into the fleet. They can also carry this over to the civilian world when they are done,” said Hewitt. “I compete in national fencing competition even at the age of 70.” The Naval Academy has been involved in intercollegiate fencing since 1896, and has a long tradition of outstanding fencers and coaches. There are 57 fencers included in the USNA Athletic Hall of Fame, spanning the classes of 1917 to 1994. Many were selected as members of the U.S. Olympic, Pan-American, and NCAA All American teams. Others qualified as U.S. National Champion, NCAA or AIAW Individual Champion, Eastern Collegiate or National Regional Champion, said Petruncio.

The meet provided a valuable opportunity for midshipmen to gather knowledge from alumni.

“It is exciting because we get to fence some of the greatest names that have come from this school, and it is a chance for the alumni to come back and relive that legacy that they started for us,” said Midshipman 1st Class Naomi Ngalle, Navy Fencing Team club president. “This is really a privilege to have them come here and compete with us and at the same time teach us and help us grow as Navy fencers.”

“I'm proud of the leadership of our club officers and weapon squad captains, and of the energy and dedication of each the fencers who come out to practice each afternoon,” said Petruncio. “I'm also happy that Midshipmen still have the opportunity to learn, practice, and refine fencing techniques and tactics, and develop their judgment and confidence on the fencing strip. Honorable conduct and quick decision making in the heat of battle is what our program is all about.”

For information about Navy Fencing, visit http://www.usna.edu/FencingClub/
Posted by Unknown at 2:22 PM