The Navy’s top submarine commander welcomed the future submariners of the U.S. Naval Academy’s Class of 2016 to the fleet at a dinner and reception Feb. 2.

Commander, Submarine Force Atlantic, Vice Adm. Joe Tofalo addressed the 137 first-class midshipmen who were selected for service assignment about the history of U.S. Navy submarines and the part they will have as future submarine officers. 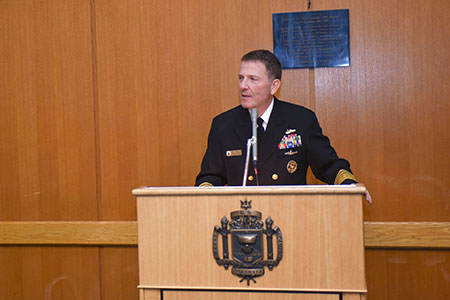 “You are that future of the submarine community, and we need you to do what you are doing and step up to be part of this legacy we have,” said Tofalo. “If you think about a submarine, there is not one single defensive weapon on a sub. We are all teeth. During World War II Navy submarines made up less than two percent of the forces but were responsible for about 55 percent of maritime losses. Now submarines are responsible for over 50 percent of our nation’s nuclear weapons.”

The assignment dinner is an annual event and represents a unique opportunity for the Midshipmen to meet the senior submarine officers in the Navy and be welcomed into the community.

“I am very proud of what you have done,” said Naval Academy Superintendent Vice Adm. Ted Carter. “The submarine community has been our asymmetric advantage going back to World War II and still continues to be today. You, the Class of 2016, are going to lead that into the future.” 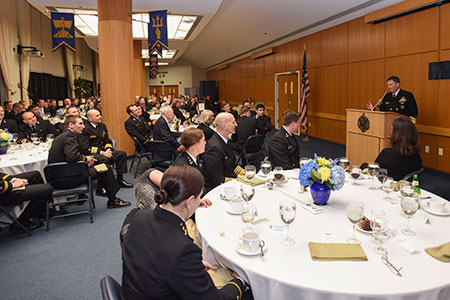 “It is very motivating to hear from some of the top submarine officers in the fleet,” said Midshipman 1st Class Riley Miller. “I am so privileged and honored to be one of the women selected, because it was really competitive in my class. I cannot wait to go out in to the fleet and hopefully get on a fast attack.”

“It was a very exciting process to become the first class of women to enter the submarine community,” said Lt. Kayla Barron, flag aid to the academy superintendent.

Barron was part of the Naval Academy Class of 2010 and in the first-ever group of women to enter the submarine community.

“I would tell the midshipmen to work as hard as they can in power school and prototype, so they can show up to their first command with a good technical foundation and then work to develop a really good relationship with the crew because that’s what makes or breaks a junior officer," she said. "The sailors are willing to help train and help with your development in becoming a strong leader.”

The Naval Academy Class of 2016 received their service assignments Nov. 19, a milestone that put them one step closer to joining the fleet. After graduation May 27, these 137 midshipmen will attend power school and prototype training before heading to their first command.
Posted by Unknown at 10:23 AM